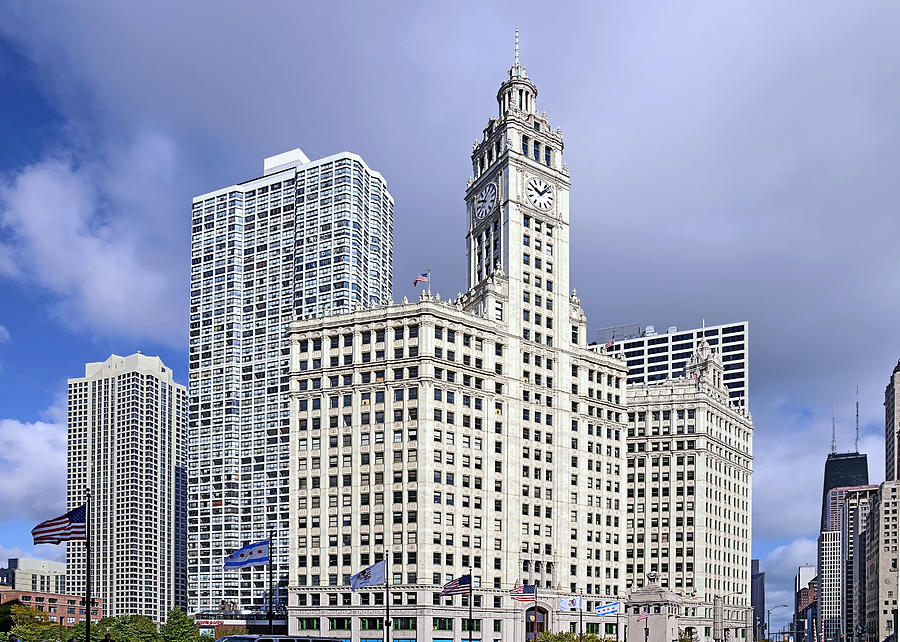 © Christine Till
When the venerable Wrigley Building (400 North Michigan Avenue, Chicago), a favorite of architects, academics, locals, and tourists, was proposed for landmark status in early 2012, many people were surprised that the "Wrig", one of the largest and most highly ornamented terra cotta skyscrapers in the city, wasn’t already a landmark. It certainly was in peoples’ minds. The former headquarters of the chewing-gum company was instrumental in transforming Chicago's Michigan Avenue from an area of warehouses to one of the most desirable spots in the city. Sitting along side the Chicago river this spot is prime.
The Wrigley Building was completed in 1924 with a 32-story tower on Michigan Avenue. With 442,000 square feet, it was the first large building north of the Chicago River. In 1925 a 36-story Gothic skyscraper was added. Its 2 sections are connected by an open walkway on street level and 2 elevated walkways on the 3rd and 14th floor. The gleaming white Wrigley Building's clock tower was inspired by the bell tower of the grand cathedral in Seville, Spain. The Northwestern Terra Cotta Company produced over 250,000 pieces of terra cotta for the building, and the plethora of terra cotta detailing on the structure reflects the quality of design and the craftsmanship of the company’s products. The Wrigley building also exemplifies the importance of architectural terra cotta to early twentieth-century commercial design. In 1946 the Wrigley Building was the first air-conditioned office building.
The "Wrig" is one of the more elusive objects to photograph in Chicago. It is most beautiful in the evening or or a clear cloudless day when the white stone is most full of contrast. One can pass by the Wrigley building 100 times and still be impressed.