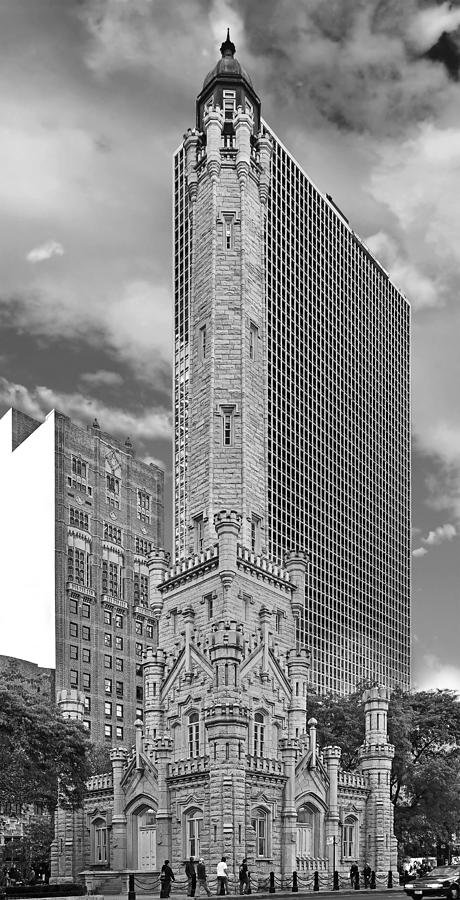 © Christine Till
In the middle of Chicago, Il, a city known for its towers of glass and steel stands a tower made of stone that looks out of place. The Old Water Tower looks like an oversized set decoration from some Elizabethan play. But this isn't knights slaying dragons, this is the city slaking its thirst. Constructed in 1869 on the banks of Lake Michigan, using big limestone blocks, the Chicago Water Tower, with all its small neo-gothic towers resembles more a tiny European medieval castle than a water tower. The tower reaches a height of 154 ft or 47 meter and once towered over all the neighboring buildings. Today it is dwarfed by the many skyscrapers surrounding the tower.
The Water Tower and nearby pumping station were the only two buildings in downtown Chicago that survived the Great Chicago Fire of 1781 which razed the whole city to the ground. Since its survival of the Great Fire, the Water Tower became one of the city's most famous icons as it symbolized Chicago's resilience. It was threatened with demolition several times - in 1906, 1918 and 1948 - but it was saved each time thanks to a public outcry. The tower was eventually restored in 1962.
In May of 1969, during the year of its centennial anniversary, the Chicago Water Tower was selected by the American Water Works Association to be the first American Water Landmark. Today the tower is one of the most important historic attractions in Chicago. Of course the building is no longer used as a functioning water tower, but the area where it stands has become known as the Water Tower District, and one of Chicago's many skyscrapers is named after it. Many people don't realize that one can go inside the Old Water Tower. It houses the City Gallery which showcases works from local photographers.