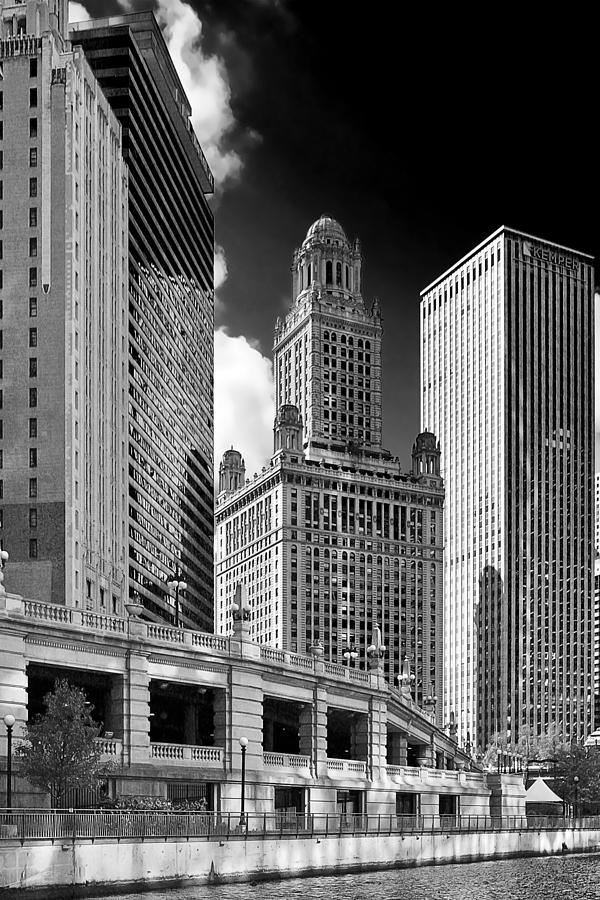 © Christine Till
One of the most remarkably beautiful buildings along the Chicago River is the octogenarian at Wacker Drive and Wabash, the Jeweler's Building, or as it is now known just by its address, 35 East Wacker. The Jeweler's Building, designed in the Beaux Arts and Renaissance styles, and built in 1926, is highly ornamented, with a sort of neo-baroque feel to it. Clad in fire proof terra cotta, the Jeweler's Building is truly one of the Chicago River gems. There are exquisite details everywhere you look. Its complex elements, including cupolas, spires and arched windows, combine to offer an extravagant and pleasing appearance that has led to its designation as a Chicago Landmark.

35 East Wacker is a skyscraper that successfully manages to meld historical styles drawn from Greco-Roman and Gothic architecture. The building, completed in 1926 and designed by Giaver & Dinkelberg, was built as an high tech office tower to attract tenants in the burgeoning jewelry trade - commemorated by the initials 'JB' for Jewelers Building. The lower 23 floors were serviced by automobile elevators that, for security reasons, transported the tenant, their jewels, and their car directly up to the office floor.

The structure of this building is typical to others of the early twentieth century in Chicago architecture. However, with the Jeweler's Building, a tower of an additional 17 stories was placed upon the main block of twenty-four stories. The crowning belvedere that marks the top of the building was originally designed as a nightclub known as the Stratosphere. Toay the dramatic and large dome houses an architectural showroom for Murphy/Jahn Architects.
Recently, ownership initiated a multi-year, multi-million dollar renovation to bring the property up to contemporary Class A standards. The interior of the the Jeweler's Building is being entirely re-built on a floor-by-floor basis with only the historic facade and structure remaining in place.