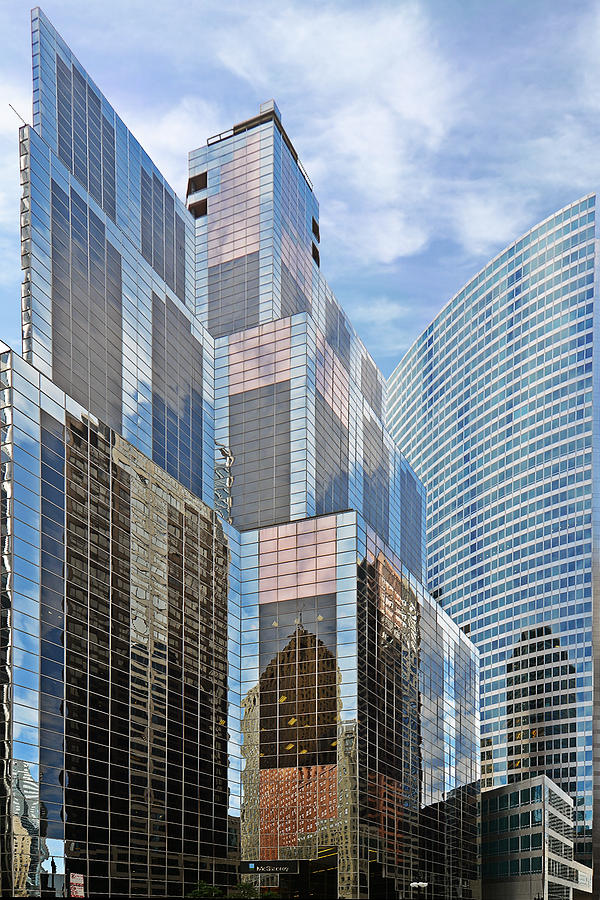 © Christine Till
Left: One South Wacker Drive Building (SunGard)
One South Wacker, built from 1979 to 1982, 550 ft tall, 40 floors, has a very unique design. The building's form recalls the spirit of a gothic cathedral, with buttress-like setbacks which allow sunlight to penetrate into this bustling corner of the Loop.
With its all-glass curtain wall in three colors: black, silver and pink. it is one of Chicago's most unusual skyscrapers. The lobby connects Wacker Drive and Madison Street and is unusual for its dark black color.
The many facets of this post-modern building makes it shine in the light. From the ground, its angles create the appearance of a massive mountain of glass and steel looming overhead.

Right: Hyatt Center 71 South Wacker Drive
The Hyatt Center, built from 2002 - 2004, 679 feet/207 meters tall, 48 Stories, was the first skyscraper built in Chicago after 9/11. The skyscraper rises from amid an overgrown forest of skyscrapers to spread light through a part of Chicago that previously seemed in perpetual shadow.
The building takes the form of a smooth oval with indentations at its two most acute points. Those indentations seem to be the silvery skin of this tower peeling back to reveal the solid structure underneath. It is constructed around a core which bears much of the weight of the larger building, allowing large column-free spaces to extend outward from the center toward the windows. In some places, that run is as much as 45 feet in length, allowing great versatility in building out offices.
But it's that silvery skin that is the building's most valuable asset to people who don't have the privilege of working inside the tower. It sets it apart from many of its older, darker neighbors.
Because the Hyatt Center is located on a very tight space along South Wacker Drive it casts mighty shadows on the streets below. But in some measure it makes up for that by reflecting an incredible amount of sunlight on the rest of the city. Even from afar, the building dazzles. Its sleek stainless-steel-and-glass walls suggest a very tall ship cruising gracefully through space.