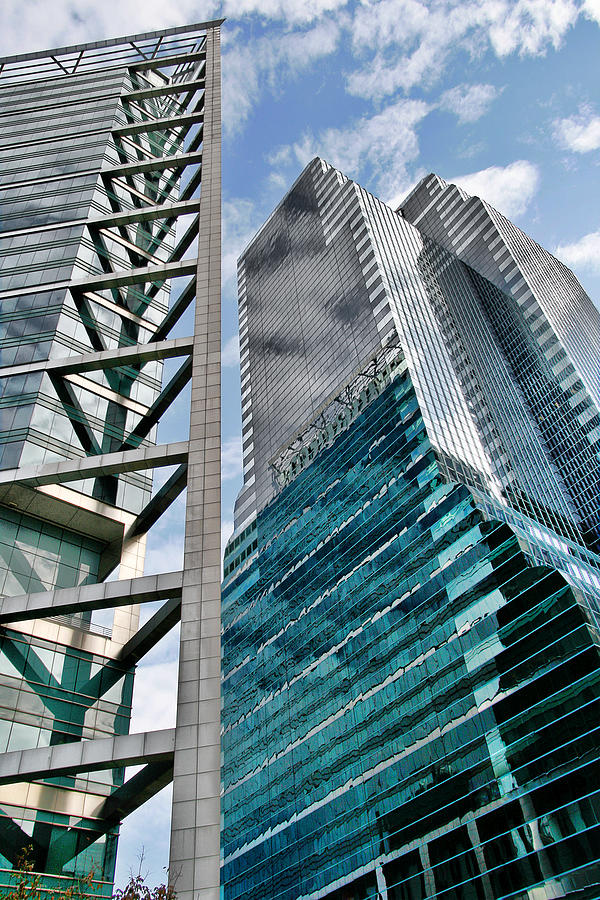 © Christine Till
Chicago, Illinois
Left - The ABN AMRO Plaza Technology Center: This sharp angular highrise along the Kennedy Expressway has a bold design that includes greenish tinted glass. The appearance of this bank's office building seems to change constantly when you walk around it. This is a pleasing result of the dynamic form of this sleek tower.
Adding new dimension to the Chicago skyline, the Phase One tower of the ABN AMRO Plaza was completed in early 2004. Read through a list of this 1.3-million-square-foot building's features and it sounds more like a letter to Santa than a realizable development. Reliability. Flexibility. Energy efficiency. It's a building goal often aspired to and seldom achieved. However, the ABN AMRO Plaza is proof that it can be done. ABN AMRO Plaza is a facility built with the future in mind.

Right - The Citigroup Center (formerly: Citicorp Center / Northwestern Atrium): The Citigroup Center is a 42 story, 588-foot (179m) skyscraper at 500 W. Madison, designed in a late modernist style. Built in 1987, it is the tallest all-glass building in Chicago.
Though some believe the shape of the building is reminiscent of a cash register to represent its largest tenant, it is actually intended to look like a waterfall to help link it to the nearby Chicago River. Part of the reason for the spread at the bottom of the building is to incorporate a shopping mall and the Ogilvie Transportation Center, a busy suburban commuter railroad station.