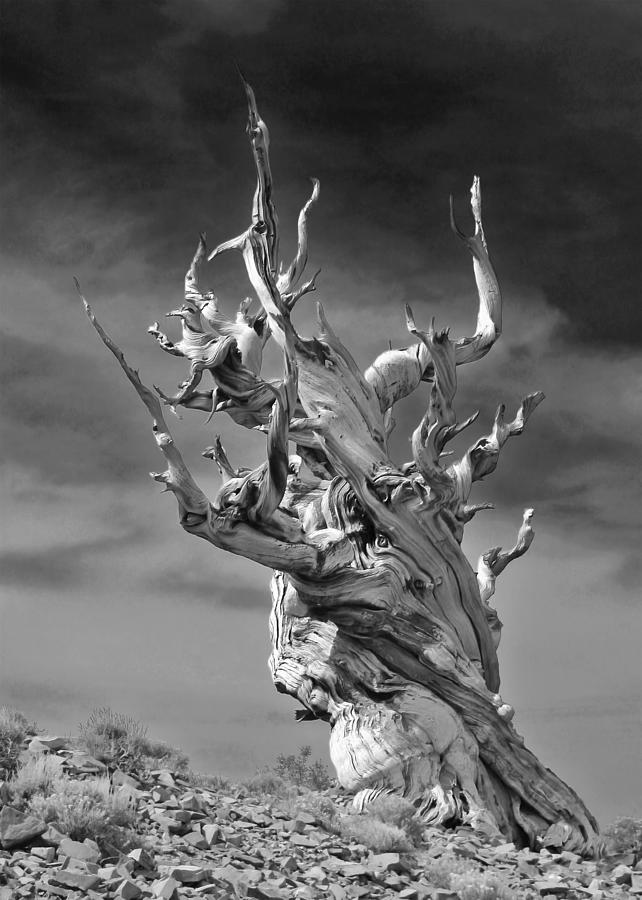 © Christine Till
The biblical Methuselah, ancestor to Noah, was said to have lived 969 years. The world's oldest living thing, the Methuselah Tree, a Bristlecone Pine in California's White Mountains, has endured almost five times as long. It thrives and survives in conditions that would strike fear into the phloem of virtually all other plants.
In the rain shadow of the mighty Sierra Nevadas, which blocks weather approaching from the west, the average annual precipitation is less than 12 inches, and most of that falls as snow in winter. In summer, which can provide as few as six weeks of warmth for bristlecone pines to generate growth and reserves for overwintering, precipitable moisture ranks among the lowest recorded anywhere on earth. Moreover, the soil the bristlecones cling to is not dirt as most plants know it but dolomite, a limestone substrate with few nutrients. With so little time to get energy from the sun, and so little energy to be had from the soil, growth is grindingly slow. A bristlecone pine may add to its girth no more than an inch per century.
Bristlecone Pine trees (Pinus longaeva) have evolved survival strategies that might make other, less hardy plants, well, green with envy. They put a greater premium on getting by than on getting big. It is an ability that, perhaps more than any other, allows the species, in standout cases, to last longer than most civilizations. The tallest sequoia, a coast redwood also found in California, is 367 feet tall. The tallest bristlecone pine is but 60 feet tall, and most of its kind are much shorter. Clearly, bigger is not better in such a brutal environment as that found at high altitude in the White Mountains.
Some gnarled old bristlecones have only a thin strip of living bark, which sustains a single living branch and its needles. In a sense, these ancients have gone back to being seedlings. Can they still be called a living tree? Well, if reproductive ability is a prerequisite to being considered alive, then the answer is a resounding yes, for even the hoariest bristlecones can generate cones with viable seeds. And however truncated that tree is, it is still the very same tree that was a seedling when, say, King Tut was a boy.