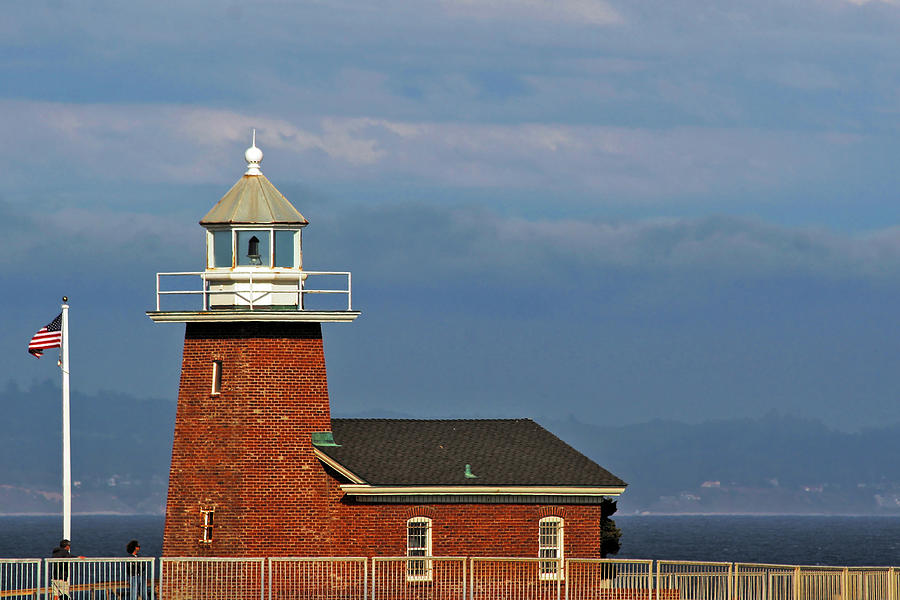 This original photograph is currently for sale.   At the present time, originals are not offered for sale through the Alexandra Till - Website secure checkout system.   Please contact the artist directly to inquire about purchasing this original.

© CT-Graphics - Christine Till
The original Santa Cruz Light was completed in 1869 with the Fresnel lens located in a wooden cupola on the roof. New sea caves were forming under the cliffs and in March 1879 and again in 1881 the lightstation had to be moved inland. In May, 1948 the old light station was finally razed.
In 1965 eighteen-year-old Mark Abbott drowned while surfing at the northern shore of Monterey Bay near the point where the old Santa Cruz Lighthouse once was. Mark's parents used the insurance money to build a brick lighthouse near the site of the old lightstation. Mark Abbott Memorial Lighthouse is home to California's first surfing museum and is 'the' location each Christmas for 'Caroling Under the Stars,' a Santa Cruz tradition which attracts hundreds of locals and visitors alike.
Same as the old Santa Cruz Lighthouse the new Mark Abbott Memorial Lighthouse is threatened by erosion, which keeps undermining the point.
In Fall 2001, a second lighthouse was built in Santa Cruz, California. The Santa Cruz Breakwater (Walton), or Santa Cruz Harbor Light, was built on the West Jetty of Santa Cruz Harbor.