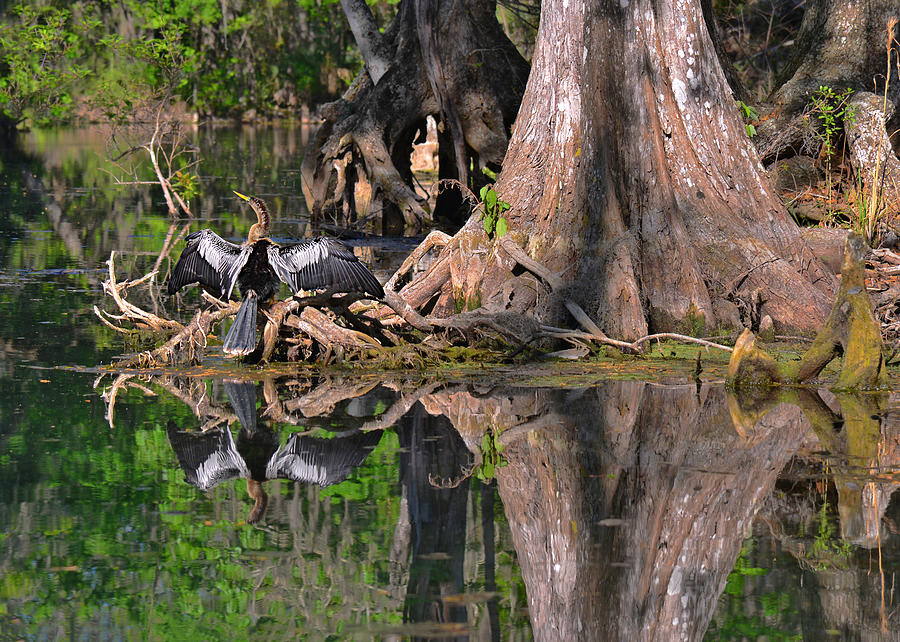 © Christine Till
The American Anhinga is a constant resident in the Floridas, and the lower parts of Louisiana, Alabama, and Georgia. Being a bird which, by its habits, rarely fails to attract the notice of the most indifferent observer, it has received various names. The Creoles of Louisiana, about New Orleans, and as far up the Mississippi as Pointe Coupe, call it "Bec a Lancette," on account of the form of its bill; whilst at the mouths of the river it bears the name of "Water Crow." In the southern parts of Florida, it is called the "Grecian Lady," and in South Carolina it is best known by the name of "Cormorant." Yet in all these parts, it bears also the name of "Snake-bird".

The Floridas are peculiarly adapted for this species, as there the torpid waters of the streams, bayous, and lakes, are most abundantly supplied with various species of fish, reptiles, and insects, while the temperature is at all seasons congenial, and their exemption from annoyance almost unparalleled. The quantity of fish consumed by this bird is astonishing. Anhingas dive completely underwater and spear fish with their long, pointed bills. Then they come to the surface, throw the fish into the air, and swallow it headfirst.

Anhingas have to dry their wings in the sun after a swim. That's when these birds can be seen perched on branches, long wings outstretched drying their beautiful feathers, and by sunning themselves, the sun's rays assist in maintaining the bird's body temperature.